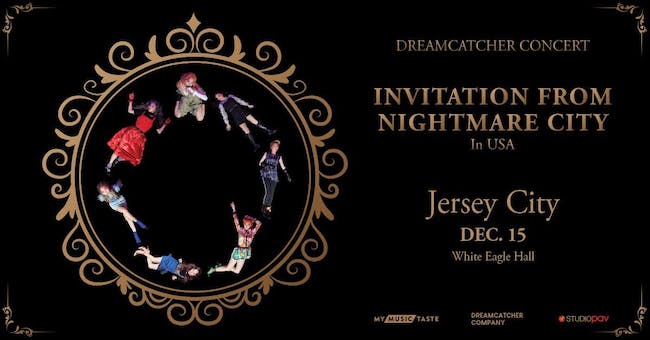 DREAMCATCHER will finally be hitting up the United States for their first tour, DREAMCATCHER Concert Invitation from Nightmare City! Get ready to day dream with the girls in Los Angeles, Chicago, Dallas, Orlando, and Jersey City!

This septet has made a name for themselves in 2017 with their unique sound which incorporates influences of rock and metal music that revolves around a horror concept. Their debut song "Chase Me" was ranked No. 19 on Billboard's Best K-Pop Songs of 2017: Critics' Picks. Subsequently, DREAMCATCHER was listed No. 3 on Billboard's Best New K-Pop Acts in 2017. InSomnia get ready to see your favorite girls this December!

*Handong will not be participating in this tour*

Please follow Studio PAV Facebook page for updates regarding the concert schedule. Meet and greet time schedule is subject to be announced and can be pre-show. facebook.com/studiopavmnc