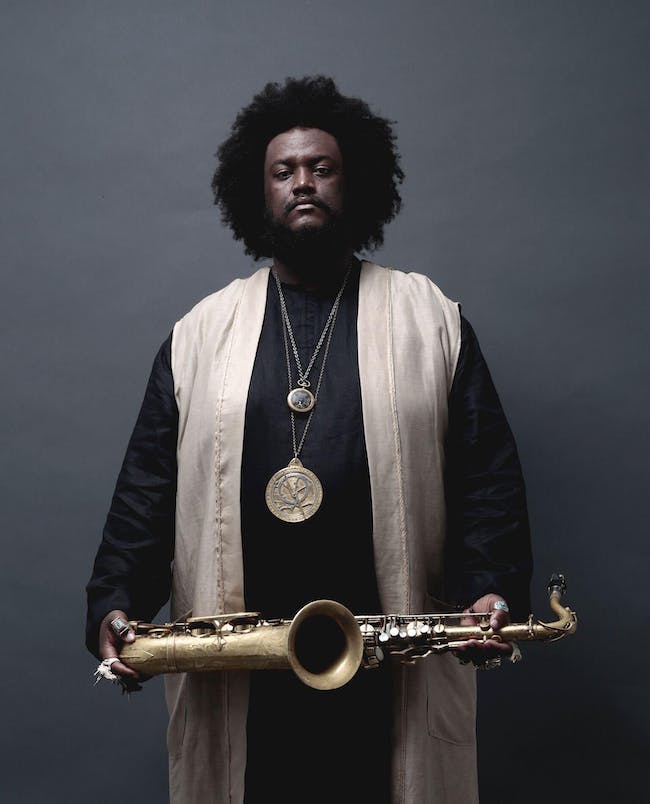 When Kamasi Washington released his tour de force LP, The Epic, in 2015, it instantly set him on a path as our generation’s torchbearer for progressive, improvisational music that would open the door for young audiences to experience music unlike anything they had heard before. The 172-minute odyssey featuring his 10-piece band, The Next Step, was littered with elements of hip-hop, classical and R&B music, all major influences on the young saxophonist and bandleader, who exceeds any notions of what “jazz” music is. Released to critical acclaim, The Epic won numerous “best of” awards, including the inaugural American Music Prize and the Gilles Peterson Worldwide album of the year. Washington followed that work with collaborations with other influential artists such as Kendrick Lamar, John Legend, Run the Jewels, Ibeyi and the creation of “Harmony of Difference,” a standalone multimedia installation during the prestigious 2017 Biennial at the Whitney Museum of American Art in New York City.

With ‘Love’s Last Chance,’ his brilliant new studio album and first solo release in five years, Taylor McFerrin has emerged as the “complete artist” he’s always dreamed of becoming, writing and singing his own lyrics and vocals on top of his dazzling instrumental and production work for the very first time. Recorded in his recently adopted hometown of Los Angeles, the collection finds McFerrin working with more freedom and spontaneity than ever before, tapping into the moment with captivating performances that blur the lines between old-school R&B, classic funk, experimental electronic music, and progressive jazz.

“I’d learned to convey myself well with my instrumentals, but something deeper happens when you sing, something that lets listeners feel like they’re truly getting to know you,” McFerrin explains. “Singing brings me closer than ever to being able to share everything that’s going on inside of me."When McFerrin released ‘Early Riser,’ his 2014 debut for Flying Lotus’ Brainfeeder label, he largely focused on instrumentals, relegating the occasional vocal part to special guests (including his father, the ten-time GRAMMY Award-winner Bobby McFerrin). The collection—which also featured appearances by Hiatus Kaiyote frontwoman Nai Palm, bass/production wizard Thundercat, and R&B titan Robert Glasper among others—earned praise on both sides of the pond, with Pitchfork hailing it as “an album built for slow weekend mornings spent in bed with a loved one” and The Line Of Best Fit calling it “superb.” Tracks from the album racked up nearly 20 million streams on Spotify alone, and McFerrin landed festival dates everywhere from Glastonbury to Central Park Summerstage.While the vintage synthesizers, hypnotic percussion grooves, and breezy melodies may feel familiar on ‘Love’s Last Chance,’ it’s McFerrin’s voice that truly steals the show here, warm and tender with a gentle confidence that conveys both deep intimacy and unsparing self-reflection. The album also showcases the new approach to recording McFerrin adopted thanks to his work with the jazz fusion supergroup R+R=Now, which featured Glasper, trumpeter Christian Scott aTunde Adjuah, bassist Derrick Hodge, drummer Justin Tyson, and synth/vocoder player Terrace Martin, who’s produced Kendrick Lamar and Talib Kweli among others.

“The whole R+R album was recorded in five days,” says McFerrin. “It was all about capturing the feeling of the moment, and there was so much freedom and excitement in that."It’s that freedom and excitement that defines ‘Love’s Last Chance,’ as McFerrin delivers a heartrending snapshot of love, faith, anxiety, and endurance, all with a potent combination of honesty, empathy, and, virtuosity. “I called this album ‘Love's Last Chance’ because in life, you don’t get a million opportunities to get love right,” McFerrin concludes. “Sometimes, with both your art and your relationships, you realize that it's now or never. For my first time writing and singing my own lyrics, I didn’t want to be messing around with make believe and fantasy. This record is real life.”