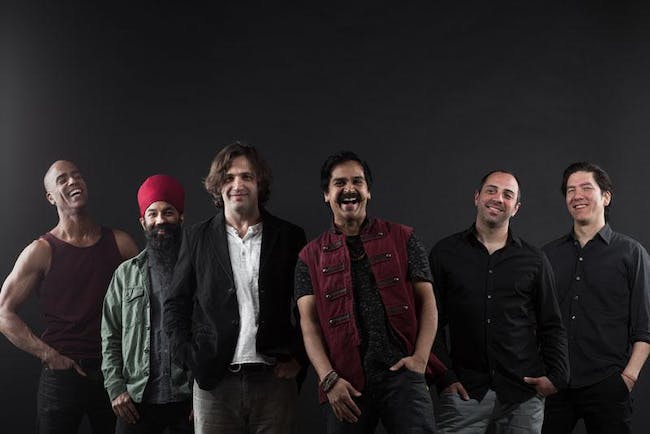 RED BARAAT is a pioneering band from Brooklyn, New York. Conceived by dhol player Sunny Jain, the group has drawn worldwide praise for its singular sound, a merging of hard driving North Indian bhangra with elements of hip-hop, jazz and raw punk energy. Created with no less a purposeful agenda than manifesting joy and unity in all people, Red Baraat’s spirit is worn brightly on its sweaty and hard-worked sleeve.

Their infectious rhythms roll over the audience like a hurricane and let the audience breathe only in a short ballad pause, to change a torn guitar string… Fred Balz, Allgemeine Zeitung, Rhein Main Presse (Germany)

Red Baraat’s June 2018 album release, “Sound The People”, hit the top 10 on the World Music Charts Europe and was heralded in the US as the anthem soundtrack for the South Asian diaspora by US hipster, indie-rock magazine, Stereogum:

The album is full of moments that hit with the force of a spiritual awakening… The funk, ska-punk, and other American forms that make their way into the music are layered intricately within the same threadwork as the ragas on which these songs are pulled from. Each piece is a gesture of cultural harmony, rendering not only genre irrelevant, but the geographic placement of those sounds.