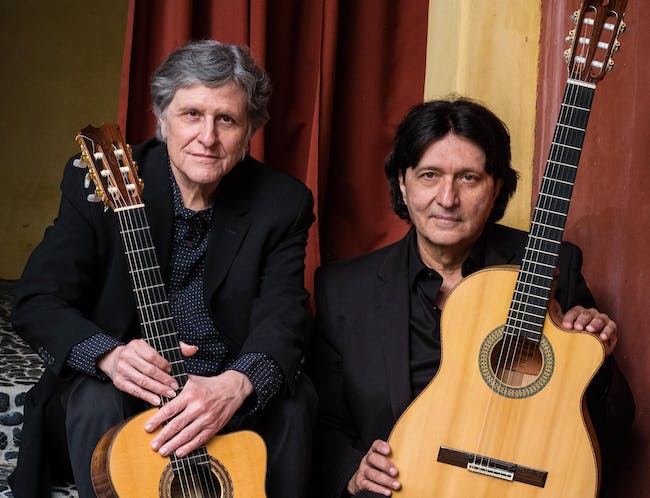 Performing together since 1979, Grammy nominees Strunz & Farah are the innovators of an entirely new expression for the acoustic guitar. Well ahead of their time they created an original style that now is widely influential. Originally from Costa Rica and Iran respectively, Jorge Strunz and Ardeshir Farah have brought the musical influences of their multi-cultural backgrounds into their highly virtuosic, rhythmic, and improvisation-rich original instrumental compositions, inspiring fans and many guitarists worldwide. Their meeting in 1979 in Los Angeles, where they are still based, marked the first time that Latin American and Middle Eastern music, along with other important elements including Jazz, came together on the guitar. They remain the undisputed masters of the style they created.

S&F’s music is perhaps best described as original multi-cultural acoustic instrumental improvisational guitar music, or world jazz. Their music emphasizes and luxuriates in sensuous melody and rhythm with a colorful and passionate expression, and is saturated with their cultural roots. Afro-Caribbean, Latin American folk, flamenco and Middle Eastern music all converge in an essentially jazz context, especially in the sense of improvisation, and is a unique contribution to the diversity of contemporary guitar music.