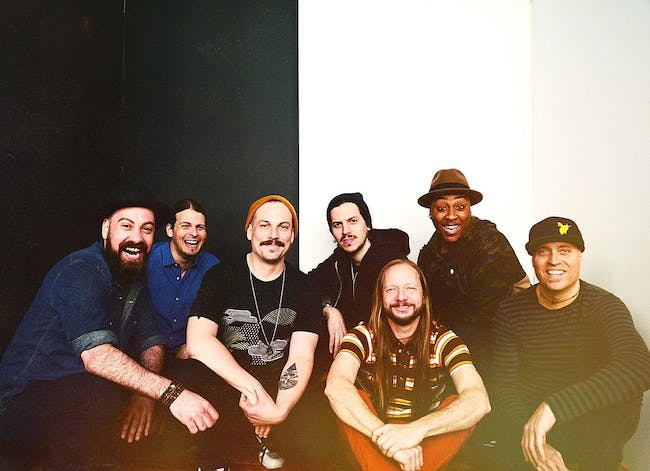 A concert or an album can unlock another world, if you let it. The Motet respect and revere this time-honored phenomenon. Fusing fiery funk, simmering soul, and improvisational inventiveness, the Denver, CO seven-piece—Lyle Divinsky [vocals], Dave Watts [drums], Joey Porter [keyboards], Garrett Sayers [bass], Ryan Jalbert [guitar], Parris Fleming [trumpet], and Drew Sayers [saxophone]—have continually provided an escape for listeners over the course of seven full-length albums since 1998, including their latest release Totem and with an upcoming 2019 release. That extends to countless sold out shows and festivals everywhere from Bonnaroo, Electric Forest, and Summer Camp to All Good Music Festival and High Sierra Music Festival as well as 16 consecutive years of themed Halloween concerts.

“When you’re listening to us, I want your mind to be taken away from wherever you are during the day and into some other place,” states Dave. “It’s all about that.”

After quietly building a diehard and devoted following, 2016 represented a watershed year for the musicians. They welcomed Lyle and Drew into the fold and released Totem, which drew acclaim from Relix, AXS, 303 Magazine, and many others. For the first time, The Motet sold out the legendary Red Rocks Amphitheater—the holy grail venue of their hometown—cataloged on Live at Red Rocks. Sell-outs followed everywhere from The Fillmore (San Francisco) and Tipitina’s (New Orleans) to Brooklyn Bowl (Brooklyn), Park West (Chicago), and Crystal Ballroom (Portland). The group locked into an unbreakable groove.

“We’ve never been a band that just blew up overnight,” Dave goes on. “We’ve been very tenacious about our movement forward. We’ve been through many different iterations throughout the years. Right now, it feels like we’ve got the lineup that’s making an impression on our scene. Lyle is the perfect match for us. He’s got musicality and this raw energy we all resonate with. He ignited this spark to put work in and write inspiring music.”

That spark lit again in 2017. Following Jam Cruise and a second Red Rocks gig, the band fired up the new single “Supernova.” Strutting between hypnotic horns and swaggering guitars, the track sees The Motet blast off to another galaxy. Quickly racking up over 150k Spotify streams in a month’s time, it instantly excited fans.

“‘Supernova’ is the first song that I was involved with from start to finish,” explains Lyle. “Joey brought in the initial musical idea. We expanded upon it and worked everything out. The word ‘Supernova’ kept jumping out to me. We decided to roll with that and give it an interstellar romantic dance theme.”

“Supernova” has kicked off a series of singles, so far including “Get It Right” and “That Dream”, that leads up to a new album coming in early 2019. However, everything comes back to the escape that The Motet deliver.

“We want to take people on a journey,” Lyle leaves off. “In order to go on a journey, you have to participate. You can’t just simply let it happen around you. You have to give yourself into that journey. Everything is open. You’re free to be yourself. You’re free to go on that adventure and journey. We want to be the catalyst for listeners to understand themselves and the world around them.”

“This is a family,” concludes Dave. “We’ve got each other’s backs. We’re doing this, because we love to be around each other and create together. We’re committed to working together because we appreciate and respect what we have to say and provide the music world and our community.”