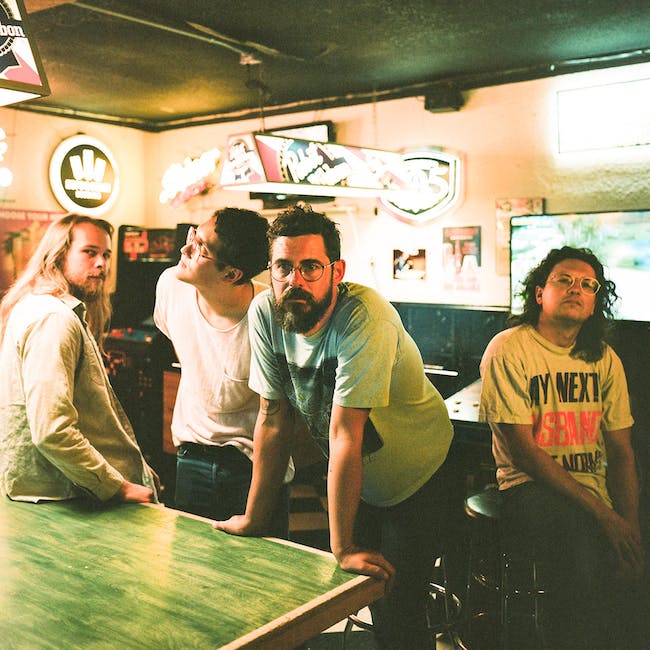 In his 1942 essay The Myth of Sisyphus, Camus wrote that “All great deeds and all great thoughts have a ridiculous beginning. Great works are often born on a street corner or in a restaurant's revolving door.” 15 years later Richard Wayne Penniman wrote “Wop bop a loo bop a wop bam boom”, an undeniably powerful vocalization that on any given Wednesday in any given situation, civilized or otherwise, is still fully capable of setting somebody’s stuff aflame. Over ten years and seven long players into their career, White Denim are still in the relentless pursuit of a thread - in other words, a wick.

The Austin,Texas band have carefully and continuously studied the greatest records ever made, but they write songs just dumb enough to drink, dance, and fight to. Theirs is a music that aims for the whole body, while equally satisfying the mind. While it has morphed, expanded, and even burst apart, White Denim’s sincere and human drive and ability to spark true rock & roll exhilaration have been unerring constants of the band’s 10-year existence.

“White Denim are one of the best live bands you will ever see if you live to be a million. That’s not excitable hyperbole, merely a bald statement of undeniable fact...” — Time Out

Abram Shook grew up in California where he spent his days surfing, studying jazz, and absorbing the rich radiant music of Brazil and West Africa, before moving to Portland, and then Boston. He finally settled in Austin, TX where he's been an active member of the city's creative community for over 10 years. His music has been praised by Vice, Stereogum, Texas Monthly, Consequence of Sound, NPR’s World Cafe, and many others. In addition to working on his own music, Abram was a touring member of Shearwater, and currently tours with Erika Wennerstrom of Heartless Bastards.

Shook’s latest album The Neon Machine, is a dystopian dance party, inspired by everything from Prince and Bowie to contemporary artists like Unknown Mortal Orchestra and Blood Orange. In contrast to his quietly reflective 2017 album Love At Low Speed, the new album’s mix of beats and slyly humorous lyrics might seem like a 180 at first glance. However, those familiar with Shook’s previous work, know that he's always explored his own brand of off-kilter funk. Relying heavily on a vintage Sequential Circuits Prophet 600, a drum sequencer, and his signature rubbery bass lines, Shook creates a world of vibrant synth-pop on his new album, but there's something slightly sinister beneath the surface. Using highly confessional lyrics and deeply personal insight to convey his trepidation towards the grim prospects of our time, he writes candidly about the country and culture that he’s grown up with, but hasn’t always felt at home in. Its backdrop is a party that’s lasted too long, and in the foreground Shook serves as a narrator full of anxiety and skepticism, whose hangover has already begun.